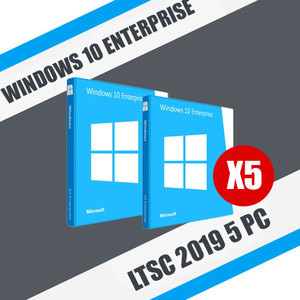 If you consider yourself to be those PC users who are not engaged in nonsense at the computer and constantly try to independently achieve some new heights in work, then in this case, you should buy Windows 10 activation keys on 5 PC, as with their help, it is possible to expand any workspace almost to infinity. The software edition presented here is directly related to the “Enterprise LTSC” edition, which, in the modern realities of using operating systems, is considered one of the newest and in essence, in demand. Thanks to this system, you can look at the working aspects from a different angle, because you no longer have to think about the fact that your system does not have enough resources to perform certain tasks. In addition, the uniqueness of this software lies in the fact that it has a more stable architecture of the software kernel, which allows you to increase the efficiency of the system and supplement it with a huge number of very impressive tools.

Turning my attention to the novelty of the Windows 10 Enterprise LTSC 2019 operating system, I would certainly like to point out those moments that are already present in it and, as a result, anyone who has this MS product at hand can easily use it:

The list of changes that the “dozen” in the “LTSC 2019” edition has undergone is quite large, but in spite of this, the developers did not stop and continue to fill the system with various exclusive applications: settings, themes and so on.

The appearance and stability of Windows 10 Enterprise LTSC 2019

As for the appearance of the system, then it is certainly worth noting that it is essentially the same as it was before, if you do not take into account the additions that have been added to it. Of course, the graphical component of the OS has undergone changes and much more unique elements appeared in terms of drawing, but in essence this is a second time, since the integral appearance of the “dozens” is still the same and is not subject to global changes. Although, according to some rumors, everything is still ahead.

It is worth noting that the activation keys of Windows 10 Enterprise LTSC 2019 will allow you to see that in terms of internal capacity, the system has not undergone any slight changes, as it was able to acquire first-class stability, which makes it possible to load its maximum and not to think that the program may at some point hang or something else. Internal OS resources are distributed slightly differently, relative to what we could see in similar versions of the program, but released earlier. Here, the power of the software kernel is instantly redirected to the area where large capacities are needed, thereby, the performance of workflows associated with the maximum loads on the system, for it flow almost unnoticeably. Therefore, loading Win 10, you do not notice problems in the form of a hang or long thinking of the team to action, you just do your job at the computer and get an excellent result at the end of your work.