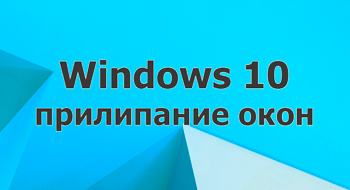 The windows sticking feature in Windows 10 is unique in itself, as it was created by its developers to make life easier for users in terms of window management. The uniqueness of this option lies in the fact that to whatever side of the monitor screen the user has pulled up the open window, it will in any case be deployed. Also, there is a possibility to pull up the window and to one of the four corners of the monitor screen, but in that case, the window will be open, but only take a quarter of the working space of the screen. As it were not there, and not all users can use this function, as for some, it's still easier to use the standard icons that are in the upper right corner of any open window. In addition, some users use a double click on the top of the open window to expand it to the full screen or, in part, to collapse. But with the function of sticking, so many did not have communication. That's why, we suggest you not to suffer, but to perform some system settings in order to once and for all give up what you do not need.

The main setting of the sticky window function is that you will have to take advantage of the system's capabilities and nothing more, so you can forget about additional software installation or, using the Tweak registry!

We open the application with the very speaking name "Parameters", now, your path should pass through "System", where you can go to "Multitasking", and then you can manipulate the switch "Automatically arrange windows by ..." which has a position "On" and "Off" in our case, it is necessary to move the switch to the second position and turn it off.

After completing this procedure, you will notice that windows sticking in Windows 10 does not bother you anymore and now, you can not just close the open window to the edge of the monitor screen, but also take out the same window beyond the monitor screen. More, there will not be ridiculous situations when the window sticks on its own and this is incredibly annoying for you, because there is no time and you need to start, as soon as possible, to start the work, and not "conjure with naughty" windows.