The icons on the desktop in Windows 8: tiles, list, or table 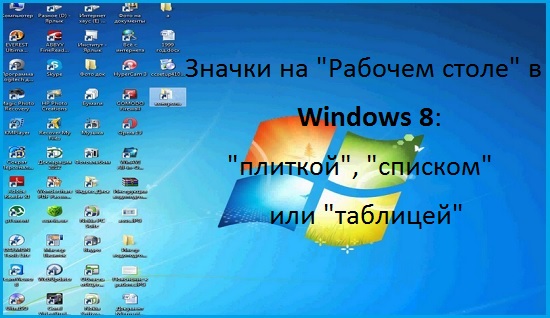 Most of you know that in the "Desktop" shortcuts can be configured only by asking them specific settings that appear as "large", "normal" and "small." But for some of you, this clearly will not be enough, which is why we advise further customize your desktop icons in Windows 8: tiles, list, or table, in the same way as it can be done without on the desktop and go to the folder or another OS partition.

At its core, the very "Desk" - it's the same folder, but only for the average PC user, having a slightly smaller setting than other folders and partitions. It is understood that all that is in terms of the settings in other sections of the folders and partitions, just as there is for the "Desktop", but some items are just hidden. Therefore, you and I need to use a number of combinations of "hot keys" that would be able to activate and modify all the way you want it to us!

And so, in order to take advantage of "hot keys" to switch between different types of icons, you need to click on the «Ctrl + Shift + a digit from 1 to 8". Thus, by replacing each time the word "number" from 1 to 8, you can see the order of 8 very different arrangement of icons on the "Desktop".

Thus, desktop icons in Windows 8: tiles, list, or table be able to do just enough and most importantly without much of any problems, any PC user, which can not be satisfied with what he sees this hour in his working environment.