Switching between displays in Windows 10 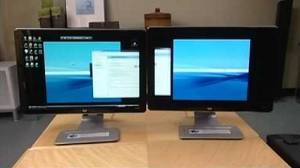 When working at a computer, very often it happens that just simply does not have enough single monitor, and consequently, PC users start using two, and sometimes even more. That's only with this use of switching between displays in Windows 10 is not very convenient. It is for this reason that we decided to tell you about how to create a shortcut on the Desktop that is convenient in all plans, which will simplify, until recently not a convenient switching process so much that you will not ever give it up again.

As an example, we suggest that you compare a couple of ways to switch between monitor displays:

And now, decide for yourself which of the above methods is easier for you to use and more convenient, provided that you will switch between displays at least 3-5 times in one workflow?

If you select the first option, then you do not need to read the information below, if you choose the second option, then be as careful as possible!

Switching between displays in Windows 10 by means of a shortcut

First, we need to go through this path: C: \ Windows \ System32, which in the last subsection, find the utility named "DisplaySwitch.exe". The desired utility can also be found with the help of the Search.

Once you find the utility DisplaySwitch.exe, then immediately proceed to configure it using the following commands:

Of all the above, only that if you need the fastest switching between displays in Windows 10, then you should create a shortcut (the name of the shortcut can be any) and assign to it the location of the path, that command ( from those that we wrote above), which in your opinion, you are most needed and you use it more often.

We draw your attention to the fact that you can create at least four shortcuts, since everything depends on what you need in terms of "fast teams".

We hope that this way of switching between displays will allow you to save a lot of time, because with minimal settings of the OS, the process of switching by means of Labels, is really working out very quickly.