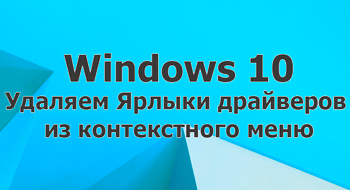 Today, we will try to tell you how to remove Driver Labels from the context menu. It would seem that a fairly simple question that every self-respecting PC user should know the answer to, but as practice shows, not everything is so simple in this niche, as it may seem at first glance. The problematic nature of this situation lies in the fact that not all PC users who use their devices for entertainment or for work even realize that shortcuts that have an icon: AMD, Intel or Nvidia can be removed with a few mouse clicks, though In fact, everything is very simple. This is what makes us start writing this article so that you have as few problems as possible.

The important point, before you start using the example described below in practice, is that before the process of deleting shortcuts begins, it is best to back up the system or, at least, back up the ContextMenuHandlers section, which It will be necessary using the context menu, just “Export” to a place convenient for you.

So that everyone can finally understand, Shortcuts: AMD, Intel or Nvidia, which are located in the context menu, are directly related to graphic devices, which means that you often do not need them and you do not use them for their intended purpose, which allows you to produce with complete confidence go to the “Start” menu, click on it in the search field and register “regedit.exe” to open the “Registry Editor” option.

The “Registry Editor” is open and now you need to go to the “ContextMenuHandlers” section, and to do this, the easiest way is through the following path: “HKEY_CLASSES_ROOT \ Directory \ Background \ shellex \ ContextMenuHandlers \”.

In the final section, you should complete the removal of mini-sections, which are positioned as follows:

This is how we, remove Driver Labels from the context menu and see that the system instantly “adapted” to the actions performed on our part and does not require some kind of reloading. Consequently, you can click the RMB in the empty area of the "Desktop" and notice that the context menu no longer has extra items.

What does removing driver shortcuts from the context menu give?

In fact, thanks to this removal, you get the following advantages:

As a result, it is clear that having spent a little time on a small process of removing seemingly ordinary Labels, it becomes noticeable how Windows 10 starts to function in all senses faster.