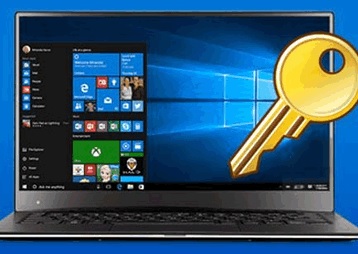 For those of you who absolutely do not know what the activation key of the Windows 10 operating system is, I would like to clarify that it looks like 25-digit code, where there are different kinds of numbers and letters. In addition, this code of 25 figures and beech, divided into five blocks of five digits with letters between which are hyphens. Made this kind of visualization for the reason that it's easier to enter code so as not to be mistaken.

1. Provided that you purchased a license activation key via the Internet, the code you need will be registered in the letter that you most likely have in your email.

2. If you did not buy the key for Windows 10, and upgrade to "ten" from an earlier version of the OS, then the system itself will work fully without entering your key. In such a situation, it is worthwhile to understand that the registration of a PC or laptop takes place automatically, provided that the digital rights are used on the Microsoft activation server. Thus, you have the opportunity to use a completely new activation scheme for your OS. It should also be noted that when buying a system in an authorized service, you somewhere on the box or on the disk, there must necessarily be a sticker with the activation code.

3. If you buy a new PC, where there is already an installed OS, it is worthwhile to understand that the system is built into "UEFI". In these situations, it is not uncommon to find a sticker with the code on the system builder's body or inside the PC documents.

Note that provided that you do not have a sticker with the code, do not worry, because if you have a licensed operating system Windows 10, then the binding to the UEFI activation chip will always be. Even when reinstalling the OS, automatically registering your system on Microsoft servers will be the system, not you. Thus, the "dozen" allows you not to worry about the loss of the electronic key, because it is always attached to the hardware of the computer and becomes one with it.

If you need to know the Windows 10 product key for the reason that you replaced the motherboard or network card, then it's easier to contact Microsoft support, as they can manually re-register your OS to new hardware data.

4. Well, in conclusion, I would like to say that if you do not want to suffer not with one of the above methods, but want to know for sure the activation key of Windows 10, then it's easier for you to use one of the programs that allow it to be done in a matter of seconds. Note that there are a lot of similar programs and among them there are both fully installed in the OS and portable.