How to turn off the touch keyboard sounds in Windows 10 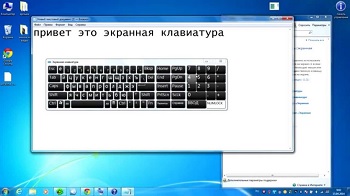 Today, you have the opportunity, together with our article, to turn off the touch keyboard sounds in Windows 10, as for some users working on computers or laptops, this possibility of disabling extraneous sound is simply vital. The reasons for which you need to disable the sound of the virtual keyboard are quite a lot, but in any case, they boil down to the fact that you only need silence... In fact, to make the necessary changes to you with the settings in Windows 10 is quite simple, but before By this, let's figure out why and from what, there are those sounds that we absolutely do not expect to hear from the virtual keyboard.

In general, the soundtrack in the "tens" was made so that any user who uses not only a regular computer or laptop, but also something more modern that has a touch monitor, could use the touch keyboard without any difficulties. It's clear that if you do not use the virtual keyboard and start typing on the real keyboard, the first one will disappear and there will not be any sounds, but you will agree that the primary sounds of the virtual keyboard appearance are not entirely convenient, and therefore you need to do this kind of action log : Open the application with the name "Options" -> find the "Devices" section and go to it -> switch the switch to the "Off" position on the tab that has the name "Play key sounds when you enter"

The method described above is very convenient and practical to use, but there is a small "BUT", which is hidden in the fact that if you have a computer or laptop without a touch screen / monitor, then you will not have any of the above settings! It is for this reason that you will have to use the tweak registry, since other options you simply do not have at the moment to configure your OS.

Use the tweak of the Windows 10 registry as follows: Initially, open a window that has the name "Run" -> we type in the search field of the "Run" window the command of the following character "regedit" -> once in the "Registry Editor", go to the column that is Is on its left side and already there, follow the following path: "HKEY_CURRENT_USER \ SOFTWARE \ Microsoft \ TabletTip \ 1.7." Once you get to the last subsection, create a new 32-bit DWORD parameter in it, which should get the name "EnableKeyAudioFeedback" with a numeric value of "0".

Now, in order to check whether you managed to turn off the touch keyboard sounds in Windows 10 just reboot the operating system, either, output the output from it, and then enter it. If everything is done correctly, then more sounds from the virtual keyboard will not bother you!