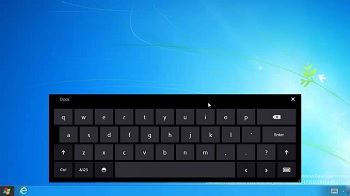 Many of you are probably asking: How to disable the sound of the touch keyboard in Windows 10? »And most likely, this very question, you can not how to find the answer... It is for this reason that we want You need help to sort things out.

As you know, Windows 10 is the next generation operating system, which was developed not only for conventional computers and laptops, but also for devices that are equipped with touch monitors. It is for this reason, when the user tries to place the cursor in the input field, immediately a touch keyboard appears, which safely disappears, provided that the same user on the real keyboard clicks on at least one of the keys. That's just worth noting the moment that if a user starts using a virtual keyboard, then she immediately starts to make a kind of sounds.

In order to disable the soundtrack, you need to go to the Settings application -> from there go to the Devices section -> switch the switch to the tab named "Play key sounds when you enter" to the "Off" position.

It should also pay attention to the fact that if your computer does not have a touch screen, then the above method will not work for you, but all because you will not have the settings described above. Therefore, you need to use the Win 10 registry tweak.

First, open the "Run" window and already in it, type the command "regedit", after which you need to use the "Registry Editor" and in its left column go through the following path: "HKEY_CURRENT_USER \ SOFTWARE \ Microsoft \ TabletTip \ 1, 7 ". Now, you need to create a new 32-bit parameter of type DWORD. The new parameter should be called only "EnableKeyAudioFeedback" and the numerical value must be set equal to "0".

For the fact that the changes you've made to the system have been fully activated and you managed to check whether or not to disable the sound of the touch keyboard in Windows 10, you can reboot the OS or simply log out and re-enter it.