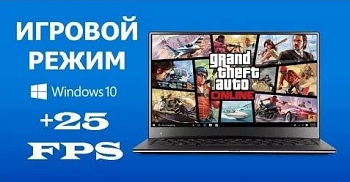 Many of you use the operating system not only to perform any kind of work on the computer, but also to play gaming applications that allow you to escape from everyday problems. That's just not all PC users have the opportunity to afford to play relatively modern games, and all that their hardware does not have the ability to play game processes at the level at which they look more qualitative and attractive. It is for this reason that Microsoft has developed a new "Game Mode" mode. Uniqueness of the new addition to the operating system is that it allows you to free up the once hidden power of the computer by disabling the numerous background processes present during the operation of the PC or laptop. The only thing you need to know is how to properly activate the game mode in Windows 10 so as not to damage the full functioning of your system and at the same time, be able to entertain with the computer with the help of gaming applications for the maximum.

How to activate game mode in Windows 10?

Before you begin to perform any configuration of your operating system, I would like to note at once that no matter what version of the system you are using: Windows 10 1703 Creators Update or Windows 10 1709 Fall Creators Update, described below is the way to configure the system in In any case, almost everything will work for everyone, the only thing to consider is the increase in FPS, which will depend on the particular computer and gaming application that will be launched on it.

To start, you need to go to the Start menu where you need to find a small icon in the form of a gear that is located in the lower left corner, after which you open a special section called "Games", and from there, go to the item called "Game Mode".

We draw your attention to the fact that if you have an older version of the operating system (1703), then in this case you will see a new window, in which there will be a radio button next to the item "Use game mode". Accordingly, it is this switch, you need to move to the "On" position.

If you have the latest version of Windows 10 (1709), then in this case, you will see a small information window, in which it will be written about the support of the new game mode in automatic mode when using the system. In this case, it is necessary to perform a manual installation or update the video card drivers, but only if the official developer site is used, since in this case, Device Manager is not suitable for updating.

Now, you should go to the section called "Game Menu" and check if the switch is set to "On" next to "Record game clips, take screenshots and broadcast them using the game menu". If the switch is in the "Off" position, in this case, it must be moved to the "On" position.

Suppose that you have performed all the above actions correctly and now you can start the gaming application. Once the gaming application is launched, use the "hot keys" "Windows + G", which will open a small menu on top of the game screen. In the opened game menu, you should go to the "Settings" (it looks like the gear icon), then you will have the opportunity to tick the box with the name "Use the game mode for this game".

If you use the version of the operating system version 1709, in which case, you can click on the game mode icon that is located to the left of the gear icon and the "tachometer" looks like. At the end of all the above processes, you must exit the settings and from the gaming application, after which, it will be possible to restart the game.

We draw your attention to the fact that after you activate the game mode for a particular gaming application, then with each subsequent start of the game, it will automatically start. Thus, in the future, you do not have to activate each time the above function in order to be able to fully play the game specifically taken.

If for some reason game mode in Windows 10 you no longer need, then in this case, you need to do all the above procedure for setting up the system, but exactly the opposite.

I also want to note the moment that when you run some game applications and call the game menu, the mouse sometimes ceases to be active, in which case you need to use the "navigation keys" that are located on the keyboard and have the arrow icons. All other actions for opening specific settings are performed using the "Enter" key.

We hope that this article was very useful for you, since we tried to create the most useful information for most of you, which can be used by every PC user, regardless of what computer or laptop he uses. In addition, as already mentioned above, this method can be considered one of the most universal, as it is perfectly suitable for almost any system of the tenth generation, regardless of what version of the update it has.