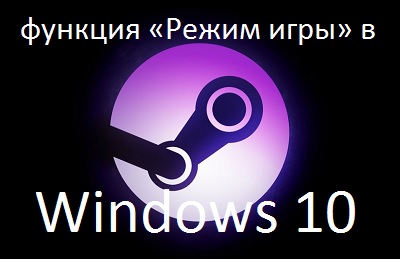 Fans of games like that now, they have a "Game Mode" function in Windows 10, which, although not much, but still can change their gameplay for the better. The main advantage of this function is that with its help it will be possible to run the once-hung-up game with practically no problems. It's clear that at this stage of development of the game mode for the OS, it is still 100% unfinished, but this is not a global problem so that it can not be used, because it already has the ability to function more or less normally and at the same time continue to Microsoft To refine and supplement it, so that the "Game Mode" in the near future is even more steep.

One of the undeniable advantages of the "Game Mode" in Windows 10 is that for the much needed function for most gamers, there is no hidden extra installation of software, which is very convenient!

How to start "Game Mode" in Windows 10

Running the game mode in Win 10 proceeds as follows: open the "Options" -> go to "Games" -> set the switch to the "On" position next to "Use the game mode".

Running the game mode in conjunction with the game in Windows 10 proceeds as follows: run the game -> right in the game, make a call to the "Game Panel" (Win + G) -> go to the "Settings Panel" (the icon looks like a small gear gray ) -> tick the box next to "Use the game mode for this game".

Just like that, just a few clicks away, you can not just activate it, but you can also see firsthand what the "Game Mode" feature in Windows 10 is.