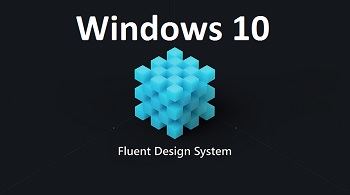 Unfortunately, not many users know that Fluent Design in Windows 10 is not just an addition to the operating system that was developed by its creators, as some kind of visual effect. This is a full-fledged set of effects that perfectly fits with the working space of the system, but it does not load it with unnecessary effects, but allows it to remain the same - simple and practical to use.

In addition, it is worth noting the moment that Fluent Design is the same project Neo, about which, until recently, so much was told on the Internet, it's just that it was renamed at some point, and after that they did not speak very loudly about it.

For those who are generally "in the tank", we explain that Fluent Design is intended to supplement VirtualBox - a virtual machine that is designed to run various operating systems in its shell and Windows 10, here, was no exception. The main functionality in terms of Fluent Design work are:

All this, in its entirety, makes the system more attractive and at the same time, it expands its working capabilities for each individual user. But only to the greatest regret, not all effects can fully work in the VirtualBox environment without additional activation of them in the manual mode. That's why, today we will talk about how everything can be activated and fully used in the work of its system.

First of all, you enter the "guest Windows 10", but with the Administrator account in use, after that, run the "Regedit" command "Registry Editor" and follow the following path:

When you reach the last subsection, refer to the column on the right and create a new 32-bit parameter of type "DWORD".

The new parameter (which you created in the previous step) should get the name "ForceEffectMod", after that, you give it a numeric value of "2" in the decimal system of the calculus.

P.S. Using the above instructions, it's worth remembering that some effects may remain unplugged, since we have to use the tweek of the registry and there is no guarantee that everything will work 100% as much as we want.

In addition, the above instructions are also ideal for running acrylic effects in other applications, even if you are using a PC that does not fit the hardware parameters to launch such steep visual effects.