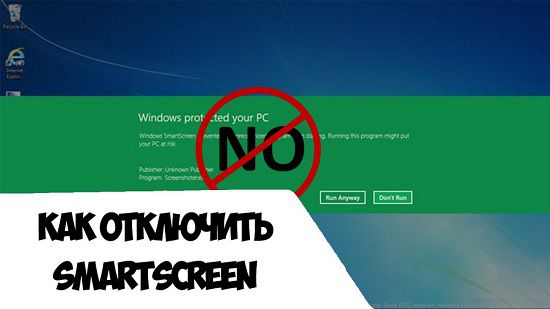 Surely, you have often thought about that from itself is actually Smartscreen in Windows 10 and for which the software is necessary in the OS. It is clear that someone knows what SmartScreen, can be regarded as Antivirus of the simplest type, which is a mini-supplement for the OS, which in fact, only a visual work, because in practice, the software is absolutely not what it can not oppose the virus the threat of having the level of danger on a scale of 2-3. For this reason, very often, some users have decided on what to off Smartscreen in Windows 10 on the condition that they already have a fullfledged antivirus, which is ready to defend the operating system for both day and night. Needless Smartscreen removal occurs gradually and does not imply a not that complicated!

The first tapas, you will need to disconnect SmartScreen, for it is better to use the "Control Panel." Using the search box, mount it in the "SmartScreen" it, and then click on "Change settings":

In the third stage, you will have to make a choice of the parameter, which is required in order to disable the software and, consequently, it is necessary to choose the option "Do nothing (turn off Windows SmartScreen)»:

In the fourth stage, go disabling the SmartScreen Filter, which constantly monitors the open URL. Go to settings "Privacy" and tick the "Disabled":

Thus, Smartscreen shutdown in Windows 10 You have passed successfully and the operation can be considered fully executed, the more it takes time to turn off the software, justified, because you probably already have a full-fledged anti-virus, and it is means that do not have a mini-program type such as SmartScreen, you absolutely do not need.