Computer shortcut on Desktop in Windows 10 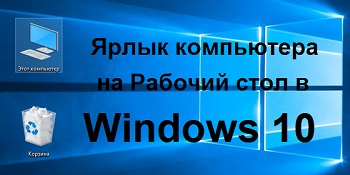 Today, we will delve into a fairly simple at first glance topic that will slightly open the curtain of secrets under which the Computer shortcut on the Desktop in Windows 10 is hidden. We decided to touch on this topic because many PC users who recently worked with: Windows XP, Windows 7, Windows 8 or Windows Vista, at the time they moved to Windows 10, noticed that the system was not has a familiar label on the workstation on which he was previously present. Of course, someone in this situation tried to solve everything on their own, but unfortunately, most users of their attempts to configure the "top ten" on their own, ended up with nothing at all. The problem of not being able to create a label is that the system of the tenth generation simply does not simply have the "Personalization" settings in its depths, and it starts with a real stupor in users, as they do not see the usual element in the system, and at best notice the new paragraph "Parameters", past which pass without any action.

How to create a desktop shortcut on the desktop in Windows 10?

Creating shortcuts "This Computer" (so he called in the "tens") begins with the fact that you move the mouse cursor in a blank area of the desktop and produces a click RMB in order to display the context menu, where you will have the opportunity to choose "Personalization", which this time will have to click LMB.

If done correctly, the above steps, you will notice that happened to open the window "Personalization" in which you should be interested only in his left side, because that is where there is an item called "Themes" on which you click LMB and you have the option to click further once the LMC under "Desktop icon settings", which will appear on the right side of the open window.

Congratulations, you've come to the "Desktop Icon Settings" window, and therefore you have the ability to configure those Shortcuts that should be displayed on your Desktop. Thus, in order to create and visually display the Computer shortcut to the Desktop in Windows 10, you must tick the "Computer" box, and then use the "Apply" button to make the changes to the system entered into the force.

Provided that all of the above steps you have been performed accurately, you will immediately be able to see the new Shortcut on the Desktop, which will be called "This is a computer."

We draw your attention to the fact that the "This computer" label is a 100% analog of the "My Computer" label, and therefore they will differ only in visual display and names.

We hope that the whole process of setting up the system described above was not too complicated for you and you were able to understand the OS settings and now the Desktop of your computer or laptop has such a coveted label that can save a lot of wedding work time.